ADVENTURES IN SCIENCE ART AND HISTORY

Superorganism-You Are a Cell in a Social Beast

A Scientific Expedition Into The Forces of History

Over a hundred years ago, Matthius Schleiden, the German botanist, was pondering the recently discovered fact that beings as simple as water fleas and as complex as human beings are made up of individual cells. Each of those cells has all the apparatus necessary to lead a life of its own. It is walled off in its own mini-world by the surrounding hedge of a membrane, carries its own metabolic power plants, and seems quite capable of going about its own business, ruggedly declaring its independence. Yet the individual cells, in pursuing their own goals, cooperate to create an entity much larger than themselves. Schleiden declared that each cell has an individual existence, and that the life of an organism comes from the way in which the cells work together.

In 1858, pathologist Rudolph Virchow took Schleiden’s observation a step further. He declared that “the composition of the major organism, the so-called individual, must be likened to a kind of social arrangement or society, in which a number of separate existencies are dependent upon one another, in such a way, however, that each element possesses its own peculiar activity and carries out its own task by its own powers.” A creature like you and me, said Virchow, is actually a society of separate cells.

The reasoning also works in reverse–a society acts like an organism. Half a century after Virchow, entomologist William Morton Wheeler was observing the lives of ants. No ant is an island. Wheeler saw the tiny beasts maintaining constant contact, greeting each other as they passed on their walkways, swapping bits of regurgitated food, adopting social roles that ranged from warrior or royal handmaiden to garbage handler and file clerk. (Yes, at the heart of many ant colonies is a room to which all incoming workers bring their discoveries. Seated at the chamber’s center is a staff of insect bureaucrats who examine the new find, determine where it is needed in the colony, and send it off to the queen’s chamber if it is a prized morsel, to the nursery if it is ordinary nourishment, to the construction crews if it would make good mortar, or to the garbage heap kept just outside the nest.)

Viewed from the human perspective, the activities of the individual ants seemed to matter far less than the behavior of the colony as a whole. In fact, the colony acted as if it were an independent creature, feeding itself, expelling its wastes, defending itself, and looking out for its future. Wheeler was the man who dubbed a group of individuals collectively acting like one beast a superorganism. The term superorganism slid into obscurity until it was revived by Sloan-Kettering head Lewis Thomas in his influential 1974 book Lives Of A Cell. Superorganisms exist even on the very lowest rungs of the evolutionary ladder. Slime mold are seemingly independent amoeba, microscopic living blobs who race about on the moist surface of a decaying tree or rotting leaf cheerfully oblivious to each other when times are good. They feast gaily for days on bacteria and other delicacies, attending to nothing but their own selfish appetites. But when the food runs out, famine descends upon the slime mold world. Suddenly the formerly flippant amoeba lose their sense of boisterous individualism. They rush toward each other as if in a panic, sticking together for all they’re worth.

Gradually, the clump of huddled microbeasts grows to something you can see quite clearly with the naked eye. It looks like a slimy plant. And that plant–a tightly-packed mass of former freedom-lovers–executes an emergency public works project. Like half-time marchers forming a pattern, some of the amoeba line up to form a stalk that pokes itself high into the passing currents of air. Then the creatures at the head cooperate to manufacture spores. And those seeds of life drift off into the breeze.

If the spores land on a heap of rotting grass or slab of decomposing bark, they quickly multiply, filling the slippery refuge with a horde of newly-birthed amoeba. Like their parents, the little things race off to the far corners of their new home in a cheerful hunt for dinner. They never stop to think that they may be part of a community whose corporate life is as critical as their own. They are unaware that someday they, like their parents, will have to cluster with their fellows in a desperate cooperative measure on which the future of their children will depend. 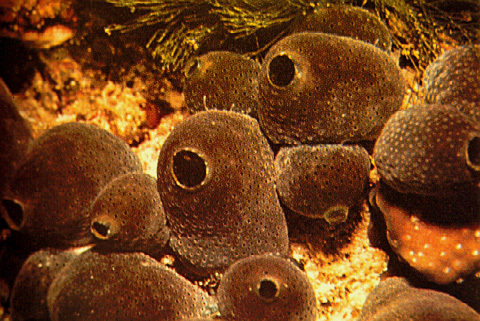 Another creature enlisted in a superorganism is the citizen of a society called the sponge. To you and me, a sponge is quite clearly a single clump of squeezable stuff. But that singularity is an illusion. Take a living sponge, run it through a sieve into a bucket, and the sponge breaks up into a muddy liquid that clouds the water into which it falls. That cloud is a mob of self-sufficient cells, wrenched from their comfortably settled life between familiar neighbors and set adrift in a chaotic world. Each of those cells has theoretically got everything it takes to handle life on its own. But something inside the newly liberated sponge cell tells it, “You either live in a group or you cannot live at all.” The micro-beasts search frantically for their old companions, then labor to reconstruct the social system that bound them together. Within a few hours, the water of your bucket grows clear. And sitting at the bottom is a complete, reconstituted sponge.

Like the sponge cells and the slime mold amoeba, you and I are parts of a vast population whose pooled efforts move some larger creature on its path through life. Like the sponge cells, we cannot live in total separation from the human clump. We are components of a superorganism.